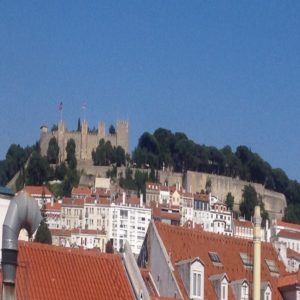 I lived in Lisbon for 18 years and I still feel like a tourist. Every time I come back for the holidays I find a city full of character and history. A city long renowned for its conquests, greatness, hardships and overcoming.

The greatness of the once capital of  a world empire can still be glimpsed at  in the monuments dotted around. We arriving at Rossio and are braced by the imposing view of the high standing ruins of Castelo de Sao Jorge. Tall above the city, the Castle was the last defensive stronghold for the Portuguese elite. It was built by the Moors in the mid-11th century and made official residence of the royalty  in 1147. The Castle hosted many notable Portuguese and foreign figures. It was here that coronations were held during the 14th, 15th and 16th centuries. 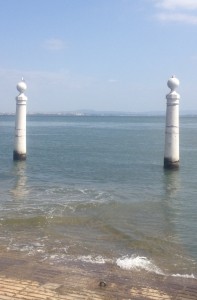 From Praca do Comercio, through the zebra-crossing we arrive at what was once the welcoming door into Lisbon. The River port opening up at Praça do Comercio once welcomed international dignitaries to Portugal via the Tagus (Tejo). From here into the ostentatious display of modernity that was Praça do Comèrcio. This area was previously known as Terreiro do Paco.

When I had previously visited Lisbon in 2008 the city seemed to have lost its mystery and beauty. There were many abandoned buildings dotted around. At the heart of the capital in downtown Lisbon the broken rooftops almost overshadowed the iconic view from the high hills. This panoramic scenario seemed to say that Lisbon has lost its sparkle. And with it also lost the ability to attract  the attention of those looking to discover what it once was. The recent economic downturn had had a visible impact. Increased unemployment had forced large percentage of young people to gradually go abroad. The tourists were in scarce numbers.

Lisbon – the turn around 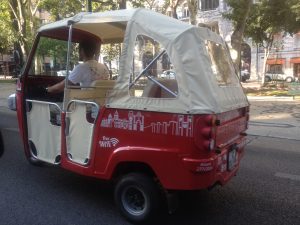 July 2014 however was a very different story. You find busy streets, abundance of tourists, special bus services and even the Tuk-Tuks, freighting people up and down the seven hills of Lisbon!

The Park of the nations where Portugal hosted the Expo 98 is now a lively site. Belem with its beautiful panoramic views of the river is again a vibrant area. Shop windows display ‘Tourist Information’. Museums and galleries are all around in an attempt to tell the stories of, Lisbon and the river Tagus.

These efforts therefore work well to restore the image of Lisbon as an iconic city. Once home to over 300 castles. 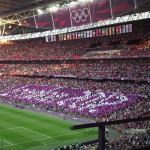 The Buzz of London 2012Articles

The Carnival at Your DoorstepArticles