“Good Service on all London Underground Lines”…. is it?

I am stuck at Baker Street station in the London Underground. I am trying to get on to the Jubilee Line and go to Westminster to get to work.

I got off the Hammersmith and Circle line and walked across the station. I went down the stairs, because the escalators were not working for the second week, and reached a packed platform.

The train is on the platform but everything is at a standstill. A pack load of people is stuffed inside the train. Another pack load of people stand by the doors waiting for the train to move on so that the next one can arrive. Nothing new so far. Same routine every single day. If I am lucky enough I may get on the next train, or the one after that. Most days I have to line up on the platform behind other commuters already lining themselves up. People seem to strategically position themselves to be in front of the doors  of the next train that gets on to to the platform.

Today I am standing there and the train has been sitting on the platform for three or four minutes. In the morning rush hour when you are trying to get to work and people keep flooding into the platform, this is a long time! No way I’ll manage to get on any time soon. The platform keeps filling up with people and the train is stuck there waiting for the green lights. Then the following announcement comes on:

Seriously!!! is this ‘good service’??? What exactly does “good service” mean?

Judging by the standard of what we go through everyday on the tube “good service” must mean “trains are running. You may or may not get on. You definitely will not get a seat. AND, when you eventually manage to get on a train, prepare to be squashed. And please remember that due to an issue at so and so station your train will be held at the platform but we don’t know for how long”.

Strangely enough people seem very civil about it all. It has been a long time since I have seen someone loose their patience and literally start pushing in a determined bid to get on. Or start swearing at the guy who stepped on their feet! All in all, the service is definitely NOT GOOD, but commuters are patient and civil. Basically they have given up and will not get upset at the start of the day because they could not get on a train. They simply line up and move towards the doors gradually until they eventually get close enough to actually get on a train.

Getting off a packed train

There seems to be agreed silent rules of ‘civilisation’ to riding the Tube during the madness that is morning rush hour. No matter how full the train gets or how squashed in the middle you think you are, no one ever seems to miss their station! Every time I start getting pushed toward the opposite door to where I want to stay and get off easily at my station I worry. But I have always managed to actually get off the train at the right station. A thin line opens up whenever other London Transport ‘victims’ around you realised that someone is getting off. 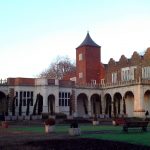 Up and About – Holland ParkBlog 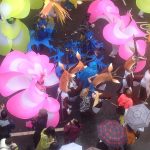